3 of 5 DeliciScore™ (Good) Awarded to Arby's for their French Dip Sandwich in Redmond, WA on this 15th day of September, 2011 - Arby’s French Dip and Swiss: Meh. Get Two.

It’s Arby’s.  Nothing to write home about (besides Arby’s Sauce and delicious roast beef sandwiches).  I wasn’t looking forward to this French dip but I felt obliged to do it, simply because it is very obvious and probably quite popular as a nationwide phenomenon.

So I went to my local Arby’s and threw down on a French Dip and Swiss.  At the time of writing this, EIGHT people liked this on Facebook.  I would hazard a guess that probably 80,000 actually like it but 79,992 are embarrassed to admit it.  Here’s my review! 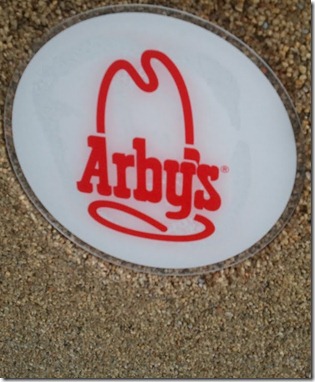 It’s Arby’s.  Who cares.  I ordered the thing.  I will admit, sadly, though, that I watched them spray the au jus out of some hot water heater thing.  Like maybe even added boiling water to a powder in front of my eyes?  It didn’t make the au jus in a styrofoam cup look any more delicious, gourmet, or very well cared for. 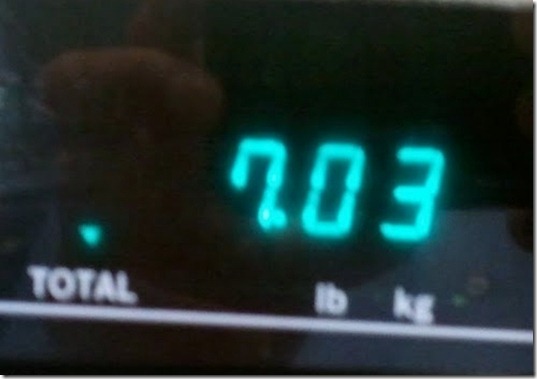 I got some Jalepeno poppers with it because the other options didn’t entice me.  Total cost with a beverage: $7.03. 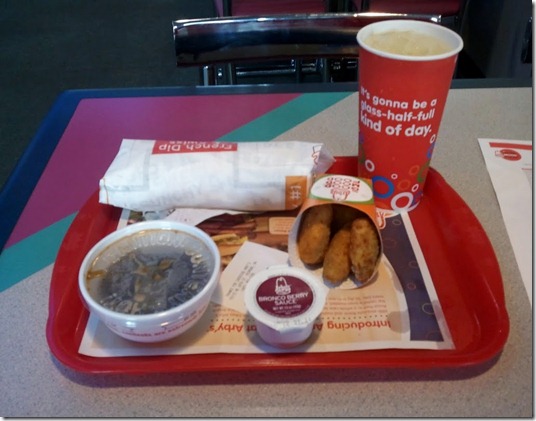 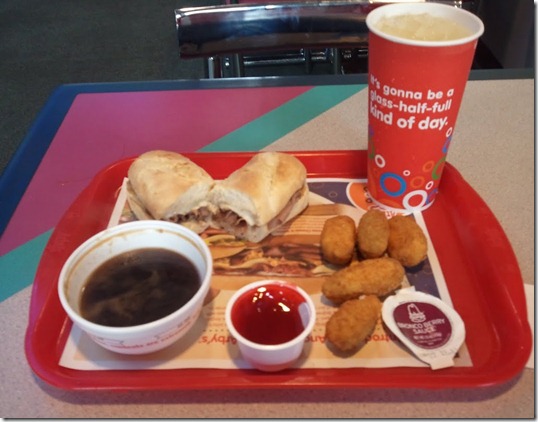 I unwrapped the items.  The Bronco Berry Sauce looked interesting.  The dip looked small.  The au jus was steaming and smelled pretty good.  I had an ice-cold sugar free lemonade.  I was generally looking forward to this but the dip looked so small!

No skewers were injured (or used) in the making of this dip.  Like the au jus shield, Arby’s customers are not to be trusted with hot or pointy things!

I was actually reasonable impressed with the bread.  It was nicely toasted.  Not too soft.  Not too hard.  It soaked up the au jus nicely.  There was not enough of it.

The au jus was hot, pretty tasty but nothing to write home about, and JUST BARELY ENOUGH.  It seriously GOT DOWN TO THE WIRE with this au jus but was BARELY able to cross the finish line with me.  Phew!

Arby’s is known for its roast beef.  There wasn’t a ton on here but it was pretty good / what you’d expect: thin-sliced, meaty, good.  Probably not enough / I got my $3.99 (sandwich no meal) worth.

Arby’s markets the French Dip and Swiss.  There aren’t onions on this, thanks God.  The Swiss cheese is processed and only serves the purpose of an unnecessary lubricant for a meal that becomes very well lubricated by the jus.

Too small.  I would recommend to anyone that if they’re going to go this route in their French dip quest that they GET TWO (2)!!!!!!!!

Overall the dip was pretty good.  The bread was good.  The Arby’s beef was good.  The cheese is to be forgotten.  The au jus was hot and JUST ENOUGH.  The portion was too small and I should have gotten two.


Other (fun?) stuff while there

The Jalepeno poppers were not fun.  They were cream cheese filled, fatty and unnecessary.  Slightly spicy but not really.  The Bronco Berry Sauce –in looking at the ingredients—had no berries in it but looked like jelly.  It behaved and tasted more like Sweet & Sour sauce.  Forget these and stick with fries or potato wedges or some such thing.

Arby’s Sauce IS TO DIE FOR.  Die for it.  What you really want at Arby’s is 500 Jr. Roast Beef sandwiches with 1,000 Arby’s Sauces.  Nothing (maybe not even the world’s best French dip? (Sacrilege, I know)) tops Arby’s Sauce.  (So succulent and delicious). 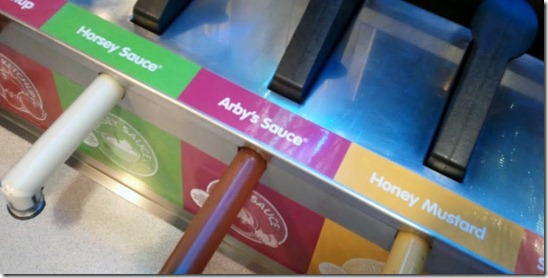 Their logo is a cowboy hat.  How fun.  My friend Brian thinks that Arby’s is total white trash.  I disagree.  I think they have some nice options and I completely LOVE dipping ANYTHING into zesty, tangy, succulent Arby’s Sauce. 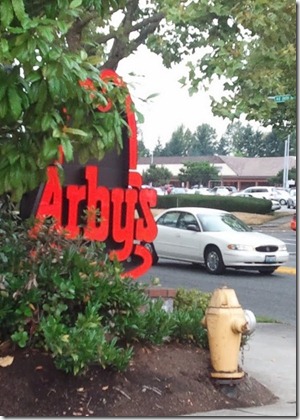 And their French Dip with Swiss, although small and carrying unnecessary cheese, ain’t half bad for the $3.99 price tag.  Remember: Get 2!