3 of 5 DeliciScore™ (Good) Awarded to Crossroads Bar and Grill for their French Dip Sandwich in Bellevue, WA on this 26th day of September, 2011 - Angus beef with Horseradish Mayo on Ciabatta

Met up with my buddy, JP, for Happy Hour after work at Crossroads Bar & Grill.  Was planning on just having drinks, but low and behold, I started talking about French Dip Reviews and I felt inclined to review one.  It’s becoming quite an anti-social endeavor: I geek out reviewing the thing and wind up having to take pictures and notes while I’m also trying to engage in conversation.  Oh well, the woes of a working stiff!

I’d seen this dip on the menu a few weeks back and wanted to try it.  I like this place in general and their deep seemed fancy. 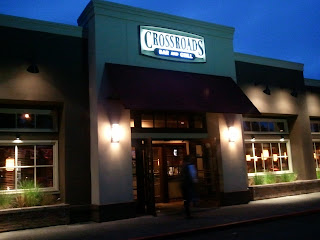 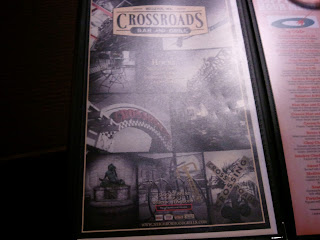 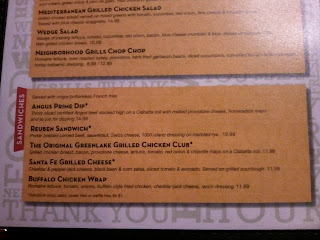 No problems here.  “"Thinly sliced certified Angus beef stacked high on a Ciabatta roll with melted provolone cheese, horseradish mayo and au jus for dipping.  $14.99"  Seemed a bit steep and it’s not prime rib, just Angus, which I figured would be good.  The Ciabatta was new and the horseradish mayo added an exciting flare to it. 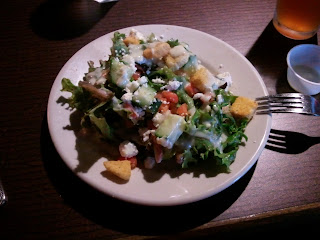 The salad was pretty good: good greens and a “balsamic bleu cheese” dressing that was quite good, although I put too much on accidentally…be warned. 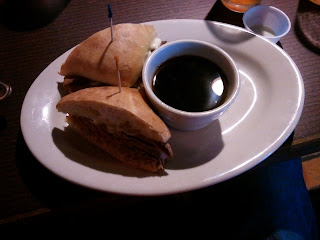 Looked like a good dip, the au jus smelled good, the portion not the largest, especially for $15.

First of my reviewed dips with a classic “frilly toothpick” skewer.

The Ciabatta was interesting.  Don’t feel like I’ve ever had a dip on Ciabatta.  It was a reasonable soft bread with no crunch but it did a good job of sopping up the jus.

The Angus beef was fine.  Definitely served medium.  JP suggested that I ask the wait staff “when was the meat cooked” so I can get a sense of how fresh / important the meet is.  I agree.  The meat was a bit chewy and course but not bad.

This had the horseradish mayo on it with added some flavor although not overpowering and it also had provolone on it.  I didn’t taste the provolone, although it probably added moisture, which wasn’t necessary.

The jus was good and hot.  Good taste, rather dark in color.  No complaints.

The portion was rather small (like the size of a small hamburger) and for $15 I might complain.

Overall, the dip was good.  It was tasty.  The horseradish mayo was very faint although added some degree of interestingness.

Other (fun?) stuff while there

Got to drink a couple of Boundary Bay IPAs, which are very good and had great conversation with JP about French Dips, technology, Microsoft, relationships, travel, The 4 Hour Work Week, and entrepreneurship.

It’s a pretty good dip overall but the horseradish may isn’t interesting enough and the size is a bit small.

Reason to go back: Not for this sandwich.  They have good beers and the ambiance in here is pretty good generally.  Nice to have a good old bar around Bellevue with pretty good eats.  JP liked his macaroni and cheese with bacon pasta.
Posted by Eric Veal at 9:27 PM