4 of 5 DeliciScore™ (Great) Awarded to Wilde Rover for their Turkey Dip Sandwich in Kirkland, WA on this 2nd day of October, 2012 - Turkey Dipper

4 of 5.  This was very good.  It wasn't a 5 because it was just not quite gourmet enough but it was a very excellent, fine sandwich.

Points for: mushrooms, great bread, a healthy serving size for a half, good turkey, non-beef jus, that they went out on a limb with a non-standard dip option that people apparently like, nice lunch options, serving it alongside good soda bread and soft butter.

Negative points for: the mushrooms could have been prettier, thicker, meatier; the turkey could have been more thick or robust; the jus should have been a little hotter but I could have just been talking for too long before I dove into it; the cheese if it was there wasn't really noticeable but it was fine.
Posted by Eric Veal at 7:46 PM No comments:

I'd heard about Mr. Beef through Rich Albrecht, a former boss and all around great guy.  I found myself passing through Chicago while on vacation this summer and knew that I had to go to Mr. Beef.  My co-travelers (Jessica and her parents) were good sports and didn't mind having a sandwich.

It was a hot and sunny day and we were on our way to the airport.  Here goes! 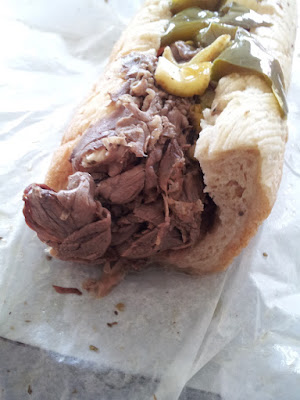 4 of 5 DeliciScore™ (Great) Awarded to Pink Pony for their Prime Rib Dip Sandwich in Mackinac Island, MI on this 11th day of July, 2012 - A delight in a far off land.


Total 4 of 5 because the dip wasn't all that fancy or to die for but was very good.

Negative points for: too little jus, the bread could have been fancier, there's nothing that's really striking or rare about the dip.
Posted by Eric Veal at 7:09 PM No comments:

11 AM last Saturday after I got up at 5 AM and water-skied in the rain (thanks, Pete, that was a blast, and Ryan, you are my water-ski hero) I was aching for Mexican food from El Toreador (had never been there but had heard that they have very thick, homemade tortilla chips that I wanted to try) but after parking and getting out of the car in the rain and all that, I realized that El T didn't open until 11:30 AM.  Panicked, I walked next door to a dive bar called Palmer's to use their restroom and enjoy a drink while I waited for El T to get its act together.

Yet lo and behold, part-way into my beer as I perused their menu and studied the gentleman next to me who was eating a French dip, I realized I had to eat.  They have a Turkey dip with Pepper Jack option on the menu, so I figured I'd be stupid not to get it.  I knew while ordering that it would come with beef juice and not turkey juice but oh well.  Palmer's also offers classic roast beef with Swiss and burger dip choices.

My apologies but I wasn't in the mood to take pictures of the location or dip so you'll have to go off of my wonderful, descriptive prose.

A quick rant about juice pairing: it makes me absolutely livid (kidding) that restaurants haven't figured out that they need to make a jus that pairs with the meat.  For example, Palmer's serves regular beef jus with their turkey dip.  Really?  Why?  And even Philippe's, the original, uses beef jus on their lamb and turkey sandwiches.  Shame on you, people!!!

Okay, back to it.  So I got my Turkey dip with Pepper Jack and a side salad with bleu cheese served.  The style of the sandwich was very classic, bar-style: simple French bread roll from the likes of a Franz Bakery (store bought, nothing fancy) and a very mediocre salad on the side.  The meat and cheese were fine, no big whoop there.  The Pepper Jack may have even been processed cheese, which would be a failure if I took the time to study it.  The jus was way too watery and extremely disappointing but I didn't complain since I had enough.  The salad was quite poor, definitely nothing special there: boring iceberg-style lettuce and no interesting toppings to write about.

*After I'd eaten my plate* (I could complain about this if I wanted but I won't) the bartender gal asked me if I liked it.  I paused for a while and asked her if she wanted to know its score.  She said, "What?" and I explained to her that I reviewed French dips and this was about a 2 of 5.  I told her that the jus was very watery.  She apologized and immediately went back to the cook to tell him to remedy that.  I saw several dips go out after mine with a much darker, richer juice.  So kudos to the waitress for jumping on that.

Palmer's appears to move a lot of French dips (I saw four of them before 11:30 am on a Saturday so that says something), so apparently some people order it, and possibly enjoy it.  And with three dips on the menu, I guess the odds are good.

Overall, this dip and Palmer's were not my style.  That said, I'll still have to review their burger dip and regular French dip to see if they're any better.  Also, I need to test their more robust jus to see where it lands.  Perhaps, with a bolder, more reasonable juice, they'll be fine and score a 3 of 5 instead of a 2.

Bread: 2
Meat (turkey): 3
Cheese (Pepper Jack): 3
Jus: 1 (maybe even a zero?)
Waitress: 4 (very nice, helpful, apologetic, friendly, promised to change and improve things)
Overall dip: 2
Bloody Mary: 3 (it was quite good and spicy yet they had pathetically small green olives in it)
Dip selection: 4 (nice to have three options, I want 300 options...: ) )
Posted by Eric Veal at 10:08 AM No comments:

5 of 5 DeliciScore™ (From Heaven) Awarded to Ruth's Chris Steak House for their Prime Rib Dip Sandwich in Bellevue, WA on this 22nd day of May, 2012 - What a fun and delicious treat on my 35th birthday!


Overall
This was a great meal and dining experience.  We had great service.  The music and ambiance were nice.  It was a nice sunny day out.  The French dip was good and exactly what I wanted on my birthday.  After the dinner and dessert I enjoyed a good coffee with plentiful refills.


This dip is not as good as the Jak's dip and is not as fancy as The Keg dip but the service was really great and the overall dining experience and quality of food is quite high.  The portion is very large as well.

5 of 5 DeliciScore™ (From Heaven) Awarded to Gilbert's Main Street Bagel Deli for their French Dip Sandwich in Bellevue, WA on this 15th day of April, 2012 - Really great and I hear they have varieties, too.

The price was high but worth it.  It's quality food!
I only got a half and that was enough.
They have a lot of really good looking soups on their menu: 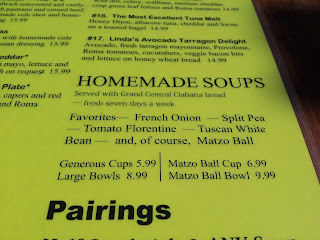 It was a slow, sunny Friday for lunch.  And it wasn't very crowded but the service was pretty slow.  The food was really good.

They have a very broad, fresh-looking menu

Their sandwiches (I saw several others delivered while I was waiting for mine) are really great looking!

The jus was thickish and almost even gravy-like but tangy and great.

The spinach side salad was a 4: fresh, simple.  Good cheese almonds, pears.