3 of 5 DeliciScore™ (Good) Awarded to Gibsons Bar & Steakhouse for their French Dip Sandwich in Chicago, IL on this 2nd day of March, 2015 -

While on a business trip in blustery Chicago, enduring a -20 degree windchill, I knew just what could warm me up – a good French Dip. So after a bit of scouring around for a place not too far away from my hotel (so I didn’t get frostbite), I found Gibson’s. Another reviewer online claimed it was the best French Dip he’d ever had, so that sounded like the place for me to check out.

Gibson’s is a high-end steakhouse with high-end prices. Steaks range from $41 - $100, so it was no surprise to me that this one be one of the pricier French Dips I’ve had. But from the amount of beef in the sandwich, $16.25 really wasn’t that bad of a price. The beef used was Gibson’s cooked-daily shaved prime Rib, mostly medium-rare. I must admit that though I am a rare-to-medium-rare steak eater, I prefer the meat in my French dip to be a little more thoroughly cooked, though. Maybe I’m the weird one in regards to that. 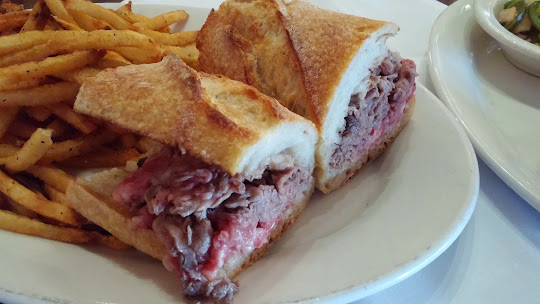 The bread was true French bread, and you could tell it was freshly baked. It had a nice crust on it, but not too hard – just sturdy enough to keep the sandwich together when dipping. The au jus was presented in a large, hot bowl on its own plate, along with various peppers, which I didn’t use to top my sandwich with. I chose rather to top my sandwich with a bit of dry horseradish – they offered both, creamy and dry. The au jus amount was plentiful for dipping through the entire sandwich. 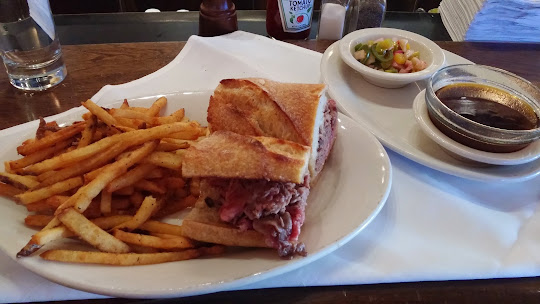 "It lacked the salinity expected in a good au jus, and I felt that the right density of the beef broth/stock was just not there."

As I got ready to take my first bite, I was really anticipating that this would be a winner, but the au jus was a major let down. It lacked the salinity expected in a good au jus, and I felt that the right density of the beef broth/stock was just not there – it was like it was watered down. The jus overall had just very little flavor. More or less I felt as if I was just eating a prime rib sandwich dipped in light brown water. I added salt to the au jus, but salt can only go so far.

Nevertheless, the sandwich was still a winner. I don’t regret it. If the jus were a little darker, with more of that beefy flavor, it would have been a strong contender for a “5.” If it were just a prime rib sandwich, it would receive a “5.” But being that this is a French Dip blog, and as the only thing that constitutes a French Dip being a French Dip is, for the most part, the inclusion of the au jus, it just doesn’t all come together to make a good French Dip.