5 of 5 DeliciScore™ (From Heaven) Awarded to McMenamins Market Street Pub for their Turkey Dip Sandwich in Portland, OR on this 26th day of November, 2015 -

While visiting Portland with a friend of mine, we spent the day exploring and getting stamps on our McMenamin's passports. Our final stop of the day was for lunch at the downtown Portland pub, the Market Street Pub. While I do not share Eric's dedication and enthusiasm for French Dip sandwiches, their Portland Dip sounded like just the thing I wanted on a rainy November day. The menu description sounded promising, and as a general fan of McMenamins restaurants I decided to review this to see if we could redeem them for their lackluster dip Eric and I shared a the new Bothell property. So, without further ado, here goes! 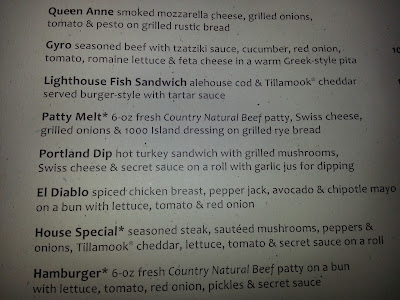 This dip is not a "traditional" dip in that in comes with turkey, instead of beef, but that made it sound that much more appealing to me. The toppings included grilled mushrooms, Swiss chesse, a secret sauce and a garlic jus. As you can appreciate below, the initial presentation was quite pleasing. 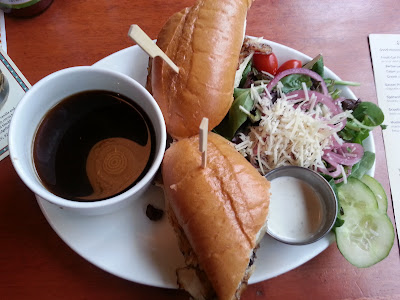 There was a reasonably thick slices of turkey layered among the mushrooms, Swiss cheese and secret sauce which was tasty, and not too plentiful so it didn't overwelm the sandwich. 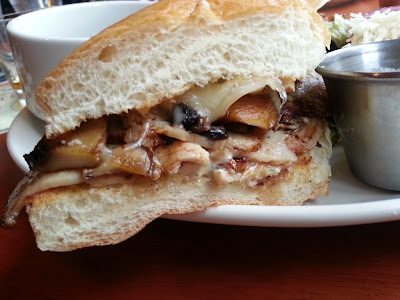 Once dipped into the jus, the bread, which was warm, the "right amount" of soft with a gentle golden crust and an absorbent center that soaked up the jus nicely. 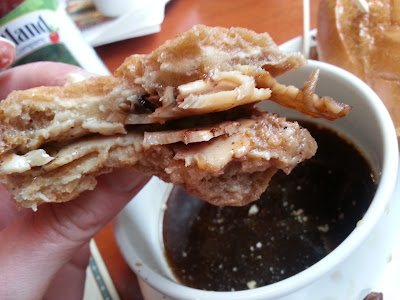 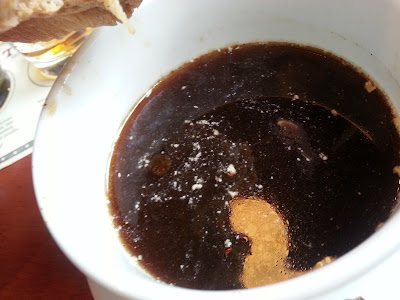 The jus itself was flavorful, served at a nice temperature and there was plenty of it. It had a nicely deep color, moderate fat droplets, and a mild but rich flavor. It didn't have an overwhelming garlic flavor and it was not overly salty, like other jus I have tasted.

The portion size was more than I needed, but probably a good size for most French dip enthusiasts. I chose to finish the green salad  (which was also good) instead of the whole sandwich so I was saddened to leave the remnants behind.They packaged up the rest for me and I finished it up for dinner - as a side note, I had to eat it cold but it was better than I thought it would be!
For someone who is not "into" French Dips, this was a very delicious sandwich that I would happily eat again. It was very tasty, not too heavy, and a perfect warming meal for a cold rainy, pacific northwest day. 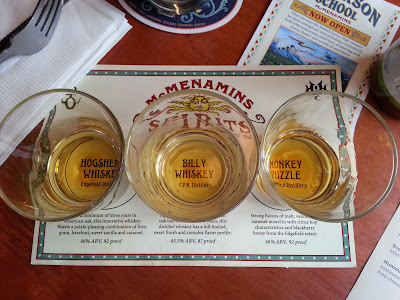 My beverage accompaniment was a selection of McMenamins whiskeys which were all tasty. My personal favorite was the Hogshead whiskey.

If I had to score this sandwich it would be a 5/5 just because I can't think of anything that would make it better. And probably because a slab of tender beef on a bun isn't what I would normally go after for a meal :)
Bread 4/5
Turkey 4/5
Toppings 5/5
Jus 5/5

In summary, the Market Street Pub fully redeemed the French Dip sandwich with their Portland Dip. I would encourage any French Dip fans who do not require beef on their sandwiches to enjoy this delicious dip.