3.5 of 5 DeliciScore™ (Good) Awarded to The LODGE Sports Grille for their Prime Rib Dip Sandwich in Mill Creek, WA on this 10th day of December, 2016 - Brian eats and reviews a mid-grade, oniony delight.

My friend Brian from Guemes eats a French dip now and again. Today was one of those special days and he was nice enough to share his experience with me via Facebook Messenger.  He included pictures and all.

Brian's review follows.  Here is an embellished version of his tasting notes and score for your information:

Here are Brian's photographic pictures with my captions added for your entertainment pleasure:

4 of 5 DeliciScore™ (Great) Awarded to Joker Pub & Grill for their Burger Dip Sandwich in Issaquah, WA on this 20th day of November, 2016 - Wonderful yet tiny Burger Dip. 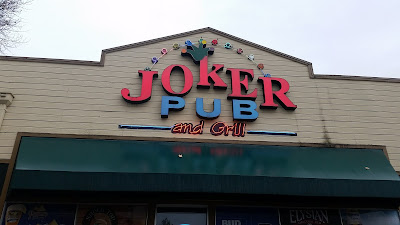 Here are my detailed tasting notes as we devoured the food meal:


So in total, this was a really good Burger dip but its biggest issue was small bread.  It made me laugh how small it was.  It was like a kid's toy.  Very delicious and fine.

2 of 5 DeliciScore™ (Not Quite There) Awarded to Jules Maes Saloon for their Prime Rib Dip Sandwich in Seattle, WA on this 19th day of November, 2016 - What could be a good Prime Rib Dip.


Here are my detailed tasting notes as I ate this here sandwich meal:


Scoring:
Conclusion:
Overall I give this sandwich and meal experience a 2 of 5 due to bad service and a French dip that seemed greasy.  Next time I go I will A) get tots instead of the salad B) get the horseradish on the side and C) make sure that it comes out from the kitchen rapidly.  I am not willing to settle for luke (warm?  No, Skywalker, you inbred) jus.
Posted by Eric Veal at 12:33 PM No comments: 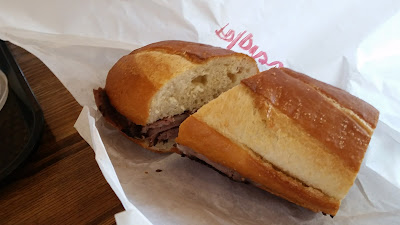 Here are my detailed tasting notes from the meal:
Scoring
Tubs is a good sandwich shop and makes a good, solid French dip that could be improved by eco-friendly packaging, hotter (jus-dipped) roast beef, and richer jus.
Posted by Eric Veal at 12:37 PM No comments:

5 of 5 DeliciScore™ (From Heaven) Awarded to Nine O for their Prime Rib Dip Sandwich in Bellevue, WA on this 5th day of October, 2016 - Onion jam? Yes, please.

I met up with my buddy Berry last night for drinks and a business conversation.  It was 6:30 and I was starving.  At first I thought I was going to get an appetizer to hold myself over for a real dinner but I realized I was just too hungry that I had to go all in.  ...And they had a French dip (Prime rib dip) on the menu...so I threw down...all in.

I told Berry about my French dip eating and reviewing hobby (habit) so I got to entertain him with the process of photographing it, reviewing it and eating it like a freak.  It was fun.  I used to be embarrassed, quite literally, of doing my French dip reviewing in front of others but now I am pretty proud of it and think it's funny.  I have fun with it and can still engage while going through the reviewing motions.  It's a fun and silly hobby.  Berry had to endure the note-taking I was doing into my phone but that was fine.

So the Prime rib dip came out while I sat there talking to Berry.  The smell of the jus immediately permeated my nose and I was stoked and simply enjoyed the aroma, adding to my conversation.  It looked really good, too, so I felt like I would be in good shape.  I tasted the sandwich, standalone, and it was very good.  The beef was medium or beyond (which scores it a points lower) but was overall good.  The onion jam flavor was very delightful and I'd never experienced it on a French dip.  It was a wonderful condiment and accompaniment.  I sipped the jus, standalone, and it was salty and rich. It was perhaps overly salty but that's what a French dip is about, right?  The salt?

The dipping was good and as I enjoyed consuming the whole sandwich, what impressed me more than anything was the crunchy toasted quality bread, the rich jus, and the extremely delicious onion jam.  Onion jam!

After I devoured the sandwich, I moved onto the salad, which was good but not really notable.  Some of the lettuce had wilted some due to its close proximity to the hot sandwich and jus. Overall, it was fine, had croutons and okay dressing but nothing too wonderful.

The presentation of the meal overall was nice with good Mamma lil's peppers on top of the twisted bamboo skewers, handsome bread and good dishes.

4 of 5 DeliciScore™ (Great) Awarded to North Bend Bar and Grill for their Prime Rib Dip Sandwich in North Bend, WA on this 7th day of September, 2016 - Prime Rib & Cheddar


So here is the review, people:

So there you have it, dear Mr./Mrs./Ms. reader person.  I hope you enjoyed the review and will enjoy a French dip of your own very soon.  Or at least a conversation about one.
Posted by Eric Veal at 8:31 PM No comments:

5 of 5 DeliciScore™ (From Heaven) Awarded to Georgetown Liquor Company for their Vegetarian Dip Sandwich in Seattle, WA on this 14th day of July, 2016 - The Picard - God, it's good! 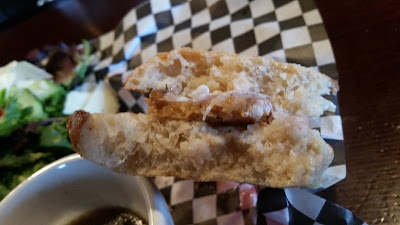 It was a Friday and I had the day off of work because I had been on call the previous weekend (see the Cowiche French Dip review from my trip to Yakima).  It was a lazy and fun day and I didn't have much going on.  So I figured a French dip would be a good treat.  So I looked on my French Dip To Do List on Foursquare for my next adventure and I found the Georgetown Liquor Piccard.  I had been told about this French dip years ago by my old pal Charlotte who is a food stylist, foodie, cook, artist, etc.  And I knew it was vegetarian but she said it was delicious so I knew I had to hit it up. And I had not had a vegetarian French dip before so this was fascinating and exciting to me.  I was intrigued.

I showed up at Georgetown Liquor at lunchtime on a Friday and there weren't too many people there but I immediately liked the place.  I sat at the bar and enjoyed the company of the bartender.  A few others were there but it wasn't very crowded.


Here were my tasting notes so you can get the full effect:

Bread: 5 of 5
"Meat": 4 of 5 - I love that it's not meat and so good.  But it's not meat and can't beat excellent beef so I"m going to pull out the penalty flag here but an excellent use of delicious protein.
Au Jus: 5 of 5 - And done with out meat so that's awesome
Overall: 5 of 5 - Absolutely delicous sandwich and salad at an affordable place at a funky place with friendly people
Posted by Eric Veal at 8:21 PM No comments: