4 of 5 DeliciScore™ (Great) Awarded to Ram Restaurant & Brewery for their French Dip Sandwich in Issaquah, WA on this 21st day of May, 2016 - Piled high with tasty beef. 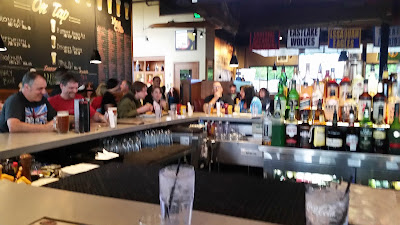 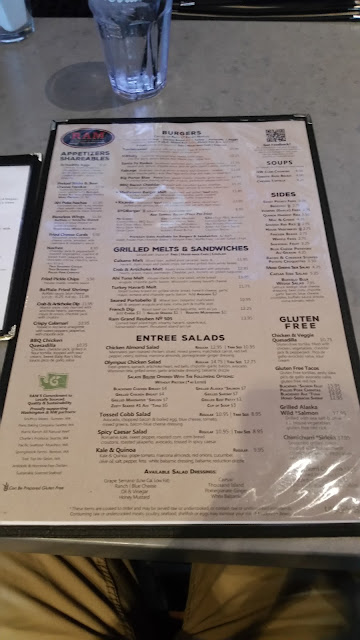 It was Saturday night and Jessica had worked all day while I worked on preparations for her special-needs horse to arrive at our new rental farm location in Preston, WA.  I was ready to get away from the house so we agreed to meet out.  First we thought Thai food, then we agreed that The Ram sounded like more fun.  So I drove out to meet her and when I got there (after taking a long time to park and parking far, far away) she was sitting at the bar.  Looking quite good, I might say.  Anyways, I sat down and we chatted.  I was feeling a bit under the weather (perhaps a cold brewing, uh oh?) so only drank water although many people seemed to rave about the Amber.  Jessica ordered a sampler of it and I tried it and it was quite good.  But I stuck to water.  We were on our way to a movie (goal was to see the new Russell Crowe movie The Nice Guys) so we didn't have a ton of time.  I'd never had the French dip and had noticed that Brian Ashbach had been getting it recently so I figured I'd get in on that action and give it a whirl. 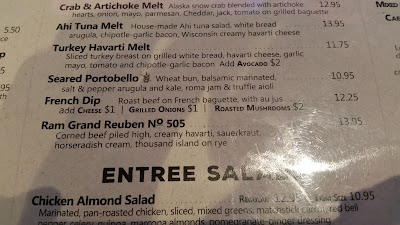 There it is: French Dip.  Roast beef (sure was) on French baguette with au jus.  (no real frills here) but the do have toppings. $1 Cheese $1 Grilled Onions $2 Roasted Mushrooms.  Although it is my custom to only order "as it is listed by the chef" I went out on a limb here and added Cheese and Mushrooms.  For cheese I was given choices by the waitress (bartender): cheddar, Swiss, etc. but I chose Havarti since it seemed to be the most "far out" and abnormal.  Although I later realized I could have things other than fries, I wasn't asked and was fine that I was expecting fries. 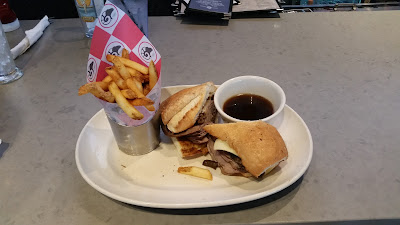 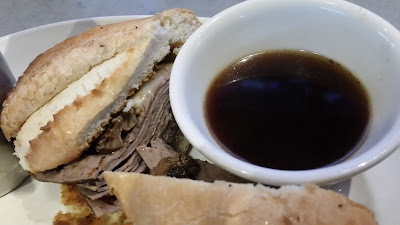 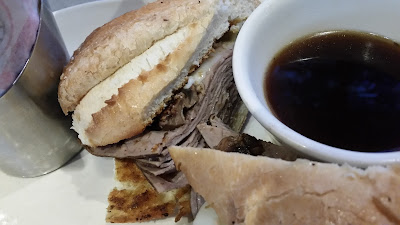 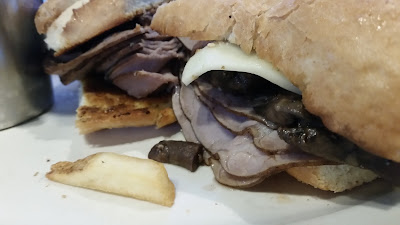 When the sandwich came out I noticed that it was a bit shy on jus so I immediately asked for more, knowing I would be in jeopardy later on.  The lady was super nice and even asked if I wanted it now or to time it when I was further through the first one and and I said now.  I need to be surrounded by jus.

So there it is, the sandwich.  You can tell that there is a lot of roast beef on this thing.  And I'm happy it's "classic" thin that way.  And they really piled it high, which was a nice feature.  Yes, it did look a bit gray in color but it was fine / good, perhaps even juicy. 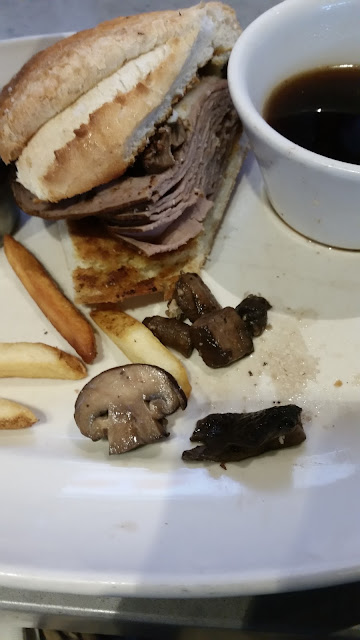 Very nice, these mushrooms they added.  They were good.  Not great, ravingly awesome mushrooms but really good, delicate and nicely prepared. 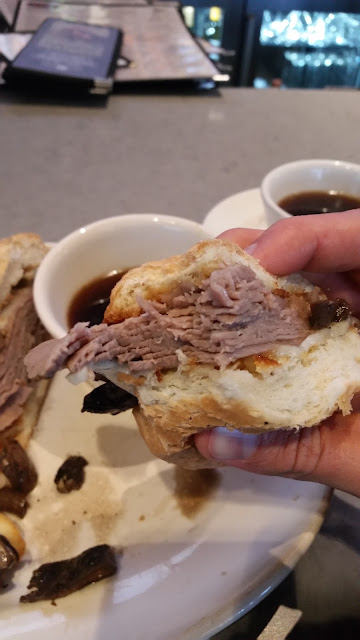 So I ate on the sandwich for a while without the jus to know what was going on as a standalone unit.  It was pretty good.  I thought maybe the bread was a bit stale but the sandwich was quite hearty (one half considerably larger than the other) but both were quite big.  The sandwich alone was pretty good.  Lots of meat.  The meat was salty but not bad; what you'd expect in sliced, deli roast beef like that. 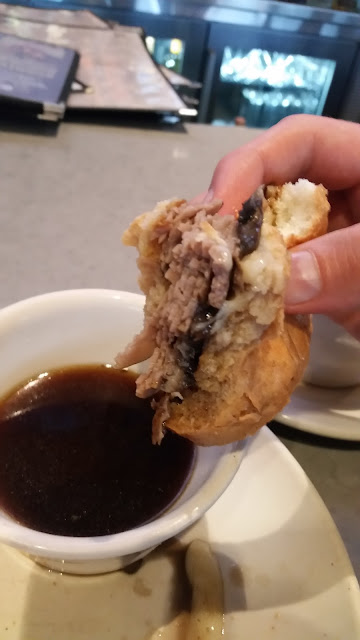 And of course at some point you have to go all the way with this thing and take the plunge.  I always get butterflies in my stomach before I do because it could either add or subtract and it can be sooooo risky!  "Will it be hot enough?"  "Will it be good enough?"  "How will it taste differently?"  So many thoughts simply race through ones mind as they stare into the abyss of that jus-y potential.  So I did.  And......it was really good.  Hot.  Salty as it should be and just plain good.  So I ate and ate and ate and dipped and dipped and dipped and enjoyed.  Then I got to the fries and they were good, too.  Jessica helped me with the fries.

Raw notes: (inside the mind of a French dip genius as he types notes into his phone while consuming a French dip)

4 of 5 Overall -  (pretty good!  Possibly stale/overly crunchy bread and the meat is good but not as thrilling as it could have been.  The $15 price tag is a bit high too, but not far fetched in King County)
3 of 5 Meat - Just lots of deli roast beef
5 of 5 Non-meat toppings - Good options here.  Lots of cheese options.  I didn't feel like onions.  The mushrooms were a really nice, gourmet touch. The Havarti was also fine from a lubricating perspective (the bread was also buttered I could see)
4 of 5 Jus - Really good jus that was hot and plentiful upon request.  It definitely added to the sandwich.
4 of 5 Bread - Good bread that may have been stale but thinking back on it, stale bread may be a good secret for a good French dip to make the jus create a larger benefit when dipped and providing some remaining chewiness post-soak.

The Ram is a fun place.  It was very lively in there, busy.  Food was pretty good.  It's a fancy, trendy, vibrant, family-friendly sports bar.