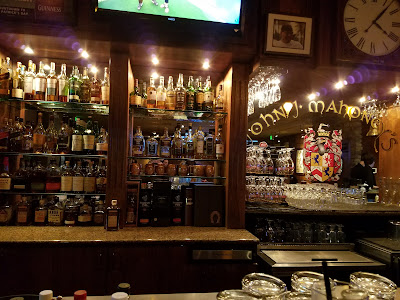 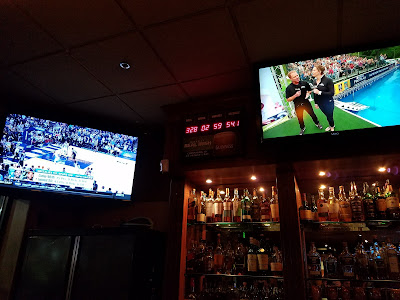 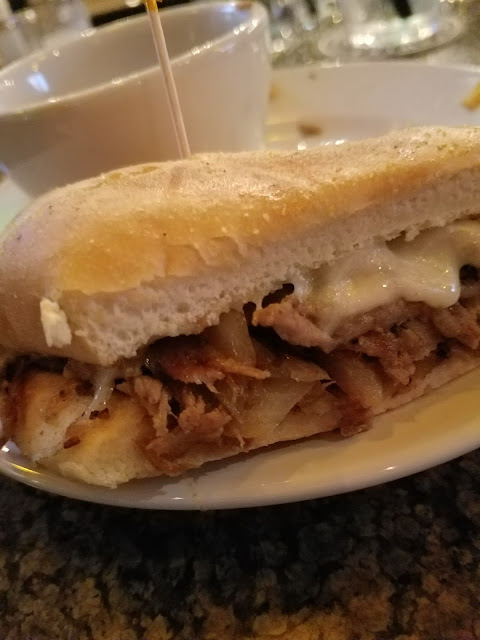 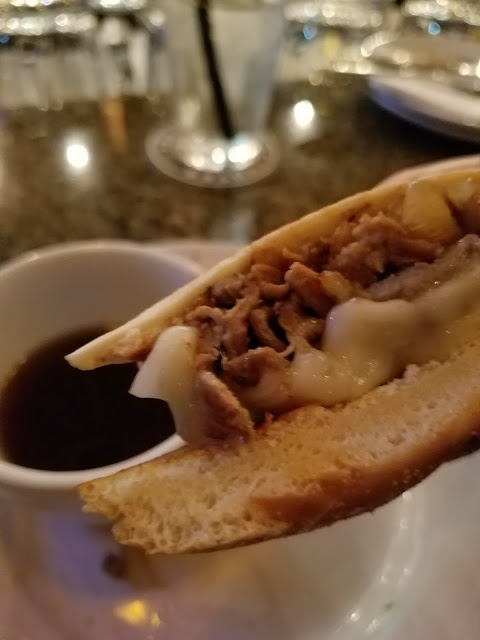 Jessica and I had gone to a political event and needed dinner afterwards.  It was a Saturday night and we went to the "Bella Botega" area in Redmond.  We like JJ Mahoney's and I had never formally reviewed their French dip.  Jessica claims (can I really trust this woman?!) that I have had it before but I clearly had not formally reviewed it, so it was time.

One time (unrelated story) we went to JJ's with Jessica's parents before a James Bond movie.  I had two gin martinis and slept through most of the movie. :)  Must have been good gin martinis and sometimes action movies can indeed put me to sleep.

Bread 3.  It was acceptable but shouldn't be so soft.  I suppose soft bread makes for a tasty treat but for a French dip I really do prefer it to be more firm bread that softens when combined with the jus.
Meat 3.  For claiming steak, this was not overly impressive.  I had a roast beef dip yesterday at Lockspot (review to follow) and its meat was about the same.
Non-meat toppings 4.  These are good and additive indeed.  The onions were good.  There was a slight black pepper flavor going on, which was nice.  The cheese looked processed to me and made the sandwich seem cheap (the too-soft bread also did not make it seem overly fancy) but did add some flavor and Jessica liked itt.
Jus 4. Was good and I'll give it a 4.
Overall 4.  I will give it a 4 because they have a pepper taste, cheese and onions standard and good jus.  This thing is not out of the world but if you were incredibly drunk or high you would probably like it.

Jessica and I like going to JJ Mahoney.  This part of Redmond still feels fun and new even though it's a couple of decades old now.  The food and drinks are consistent and good.  Jessica drank a Harp since her parents were in Ireland.
Posted by Eric Veal at 7:50 AM