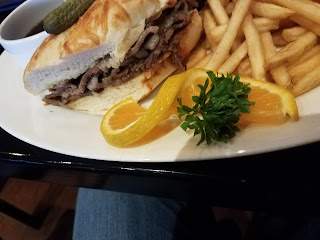 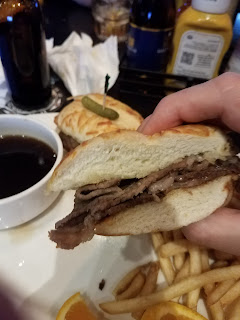 We were sitting having beers and this guy named "Cirus" came up and chatted us up.  He needed a seat.  He worked for the tribe and at some point the conversation regarding my French dip hobby came up.  He said there was one in the casino at one of the other restaurants.  At some point he disappeared and I ordered and enjoyed nachos.

Out of the blue (I thought this was super weird but also super nice), the guy reappeared with a French dip and french fries.  It honestly didn't look very good and I had just eaten so I was not overly stoked.  I tried to refuse his gift but he insisted.  So I demonstrated to my buddy Jason the technique of reviewing a French dip sandwich.  He and I agreed it was a 2 of 5 in quality and enjoyment.  I really appreciate Cirus sharing this with me (it was comped) and we had a good time at the casino, generally.  We will be back.  But I will not be back for the French dip.